Our next cake comes from Eliza – you might remember her from this. And now she’s taking baking to the next level with this: 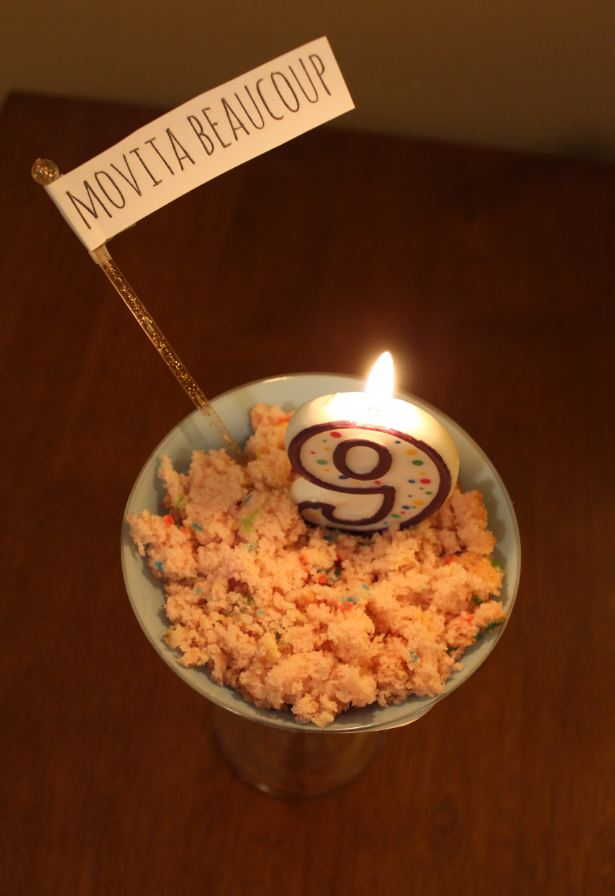 Eliza sent the following note with her entry:

Oh get ready for this one. Put down any consumables before continuing on.

I was so completely inspired by your baking school victory that I decided to go against every fiber of your oven training by performing another recipe magic trick. That’s right, the following submission was created with only two ingredients. What might those be, you’re now wondering… You might have suspected but never believed it could be funfetti cake mix and…. lemon lime cranberry pop. That means ‘soda’ for all of you other folks reading this adventure. Yep, I decided that I did not in fact need to use oil and eggs to compete in your competition. No sir, I would throw this entry together swanky substitution style. It’s probably for the best that you did not see this go down. I will admit, I felt a small tug of worry when everything bubbled together in the mixing bowl, but in the end, a perfectly pink pillowy confection emerged. I placed this fluffy stuff in the ideal vesicle, a martini glass, so that you <pictured in front> could dive right in and celebrate. I also added a victory flag for you, thinking you would absolutely like that extra touch. Finally, I put a “9” candle on top to represent your nine lives in baking school. Here’s to every lesson learned and (bitter)sweet success. Cheers!

Clearly, Eliza likes to think outside of the funfetti cake mix box. I’m not sure whether it would be best to approach that creation with a fork, spoon or straw. Cancel that. I’d use all three.

I like that this cake has been presented in a martini glass – mostly because when you go to college you don’t have time to drink. I know this goes against conventional thinking, as the evening news likes to tell you lots of stories about how the drinking and merry-making is out of control at North American colleges, but I didn’t see any of it. I was too busy doing homework.

I love this cake. In fact, Eliza’s creation demonstrates some baking techniques that a novice might not be familiar with. When you are a pro – as I am – you are better able to spot the characteristics that allow this cake to stand proudly alongside it’s more traditionally identified counterparts. This cake would most likely fall into the foam category, as these are confections that are primarily leavened with air/soda pop. We’re talkin’ millions of air bubbles working together to create the perfect crumb and texture. Cakes like these take skill, as the timing in the procedure can be difficult to master. (Thus Eliza’s tug of worry as she incorporated the soda pop – technique would have been critical here.) A foam cake should have good volume and tenderness, with a delicate crumb that is easily broken apart. Eliza’s cake could perhaps be further categorized as a sponge, as it holds a generous dose of fizzy liquid. The lemon lime cranberry pop would, in all likelihood, provide the perfect acidity to balance the funfetti sprinkles. Also, it has a rad flag and candle. (Nice touch.)

So, Eliza, thanks for schooling us. And thanks for making me a graduation cake! You’ve confirmed that going to baking school was a brilliant idea…